Why Modi is Winning?

If we go through the data of elections since 2012 only whether it is Lok Sabha or Vidhan Sabha, we will find that BJP has won more elections rather than Congress. So here the question arises Why Modi is Winning?

After my deep study about Indian Politics, I have found 5 big reasons here why Modi is winning?

If we go through the 2011 religious census data we will find that there are 86 % non-Muslims living in India and 80 % of direct Hindus. When any party speaks always about welfare about Hindus, culture and tradition it will directly affect the brain of voters. After every 3rd Hindu bjp easily gets the vote of 1 Hindu there. And in areas where polarization is more there 2 Hindus votes out of 3.

This Hindutva Card has made bjp very strong in the North part of India. And after Modi came in power they have become strong in Western, Mid, and eastern parts of India as well.

Due to the MIM party and rich Indian culture in the South, they have also become spreading their roots in South India also.

Once there was a time in Indian politics where Indira Gandhi was compared with Durga Ma and now today the time is when Modi -Shah Jodi is compared with Hindu gods.

Once there was a time when bjp was called an upper caste party as they had the majority of upper caste people only in bjp and RSS. But now things have changed even today’s pm is OBC and President is Dalit. This thing also has attracted many other people except Muslims to bjp.

Also, the most important thing here to note is in the 2019 Lok Sabha election about 9 % of Muslims voted to BJP. The thing is that Shia Muslims majority voted to bjp rather than Sunni. So all castes, religion and language people attracted towards him is the reason why Modi is winning.

The ironic thing here is that Congress had a major role in Indian freedom and bjp even didn’t exist at that time. Also, RSS was banned and was just 22 years old small organization at that time. But still today things have changed and bjp is seen as hyper-nationalist as per Indians and congress is called anti-nationalists, not by just bjp workers but some of the common Indians too.

The nationalist brand has been built by bjp very properly. The reason congress is trapped is because of supporting 370 articles and extra love towards Muslims which is their vote bank since 1947.

Days where when even petrol or cylinder price used to increase by 2-5 rs then also all Indians were used to get angry and now it has increased by 50 rs but still, people are quiet as they think that we building new India with our Modi sarkar.

If we see this Nationalist brand properly it works very effectively at Lok Sabha where the BJP win ratio is very high but this doesn’t work at Vidhan Sabha at all. So only BJP lost many Vidhan Sabha in recent years. But Lok Sabha it works effectively that’s the reason why modi is winning.

3. Welfarism and some good schemes

The way bjp does marketing of their scheme and works congress is enable to do. After some of their scheme like ayushman Bharat, digital India, atal pension yojana, ujwala yojna people think that every Indian got benefitted from them a lot.

No doubt Digital India was a huge success but other’s schemes which were not that much hit, still they were able to do properly marketing and had the positive remark in front of Indians.

Congress even did remarkable work in India and build India very well but still, they are not able to tell me due to less marketing, negative image in front of people, and lack of trust of Indian people in them. This is also reason why modi is winning.

Many people don’t know that Sangh Parivar is not only rss but it has 8 branches of them all over India everywhere.

Some of them are RSS, BJP, Vishwa Hindu Parishad, Hindu Jagruti, Bajrang Dal, and many more. When any bjp candidate files nomination from that particular constituency all 8 unite and support and do the campaign for him.

That’s where their logistics and supply chain management becomes strong. In every Vidhan constituency, they have more than 1000 workers of all Sangh Parivar.

So where it is male, female, age of 18 or 60, Hindu or Sikh or Jain they can easily reach up to them. And the biggest thing for winning is to reach the doorstep of every voter there out. This is most important why modi is winning. 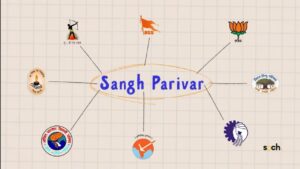 5. Good Image Leaders in front of the public.

If we compare bjp leaders with congress no doubt bjp leaders have a good image in front of people as compared to congress. The biggest confusion among Indians is that only Gandhi rule the country or congress.

If we go through data then it is clearly seen that after 1989 no Gandhi has been prime minister of India still people think that when congress is in power at the center or state Gandhi’s only rule single Handley everything.

Bjp majority leaders haven’t married and gave their lives for the country is what is seen by Indians. The same thing even Rahul Gandhi did but Congress is unable to tell people. Even their two family members died while serving the nation but they are not able to tell people.

Whether it is Atal Bihari Vajpayee, Lal Krishna Advani, or Narendra Modi they have built their good image among Indians. That’s why while campaigning when they promise anything and after coming to power they are not able to fulfill then also people have the trust of them.

Even in the first Modi Govt, they did not do many things still people again voted then due to good image, nationalism, Hindutva, good schemes, and Sangh Parivar logistics.

On these 5 points only bjp whether in 2014 or 2019 got more than 30 % votes in both Lok Sabha elections. BJP even started creating more women politicians as compared to what they had in the 2000s era.

Even after abolishing five-year plans and bringing niti aayog he got support from people.

We all know that there is the rule in bjp that after 75 age no one can take part as a cabinet minister. Also, Modiji is now 71 so after 4 years who will lead BJP. So they have also created many other politicians like Amit shah, yogi adityanath, himanta biswa Sharma, and many more.

This answer is quite difficult to answer in 2022 right now. Also, the current 5 states cant be said as semi-finals or quarter-finals. As every election is different and has diff major issues there. But thing is that BJP is still a strong party as compared to congress. Despite taking back foot in caa, NRC, and farm laws they hold more fans in India rather than congress.

If congress and other strong opp are built in these 2 years then BJP will surely lose the elections. But believe me, the opposition needs to work very hard and strategically for it.

So this was my overview of why Modi is winning? If u have any other points please let me know. Also, what are your personal exit polls for the 2024 elections let us know in the comment section?