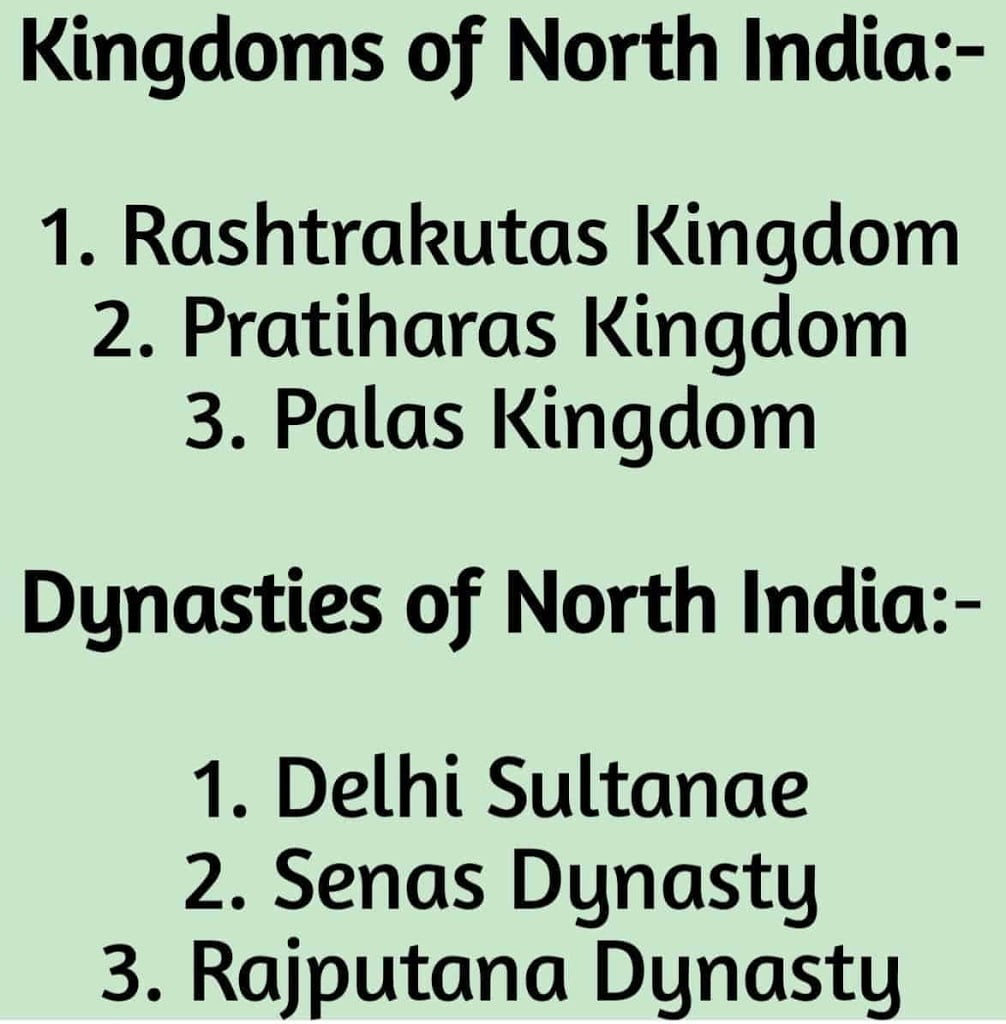 Hello Aspirants, Hope you all are doing well…!!!!

Today I will give brief knowledge about our topic “History of North India”. In this topic, I will let you know about North Indian Kingdoms, dynasties, rulers e.t.c.

Also, basic questions and answers, kings, food, and states will also be explained.

So, let’s start with one of the most important topics of Indian history i.e “History of North India”.

Indian History is divided into 3 parts. They are ancient history, medieval history, and modern history.

All 3 parts will be covered here. In north India, there were many kingdoms established by people or self-made kings.

According to historians, there were about a total of 16 kingdoms in North India.

Later on, the Britishers invaded and ruled us for 125 years.

Today we will discuss the top 3 most powerful and effective kingdoms.

Amogavarsha was the king of this empire who lived between 814-878 C.E.

Their capital and Kingdom was around Nashik in today’s Maharashtra.

This kingdom was secular and protected religions like Vaishnavism, Jainism, Islam, and Buddhism.

This was the main kingdom as they defeated Arabs and stopped them from invading India.

Later on, they moved towards east India and started capturing the east part. At the end of the 8th century, they captured the Kanuaj.

They were the ones who could change the History of North India completely.

The founder and 1st King of this Kingdom were Gopala. They have conquered a good part of Bihar and Bengal and want to conquer Kanuj too.

His son Dharmapala was very furious to conquered the whole of India but was not able to.  Pratiharas were too powerful and again took Kanauj through them.

This was the 1st Muslim power in India which started ruling north India.

There was again 5 sub dynasty under it. They were Slave, Khilji, Tughlaq, Lodi, and Sayyid dynasty.

They ruled part of the total Bengal and side region after Pratiharas and Palas.

The king was known as Samantasena was also the founder.

They were 1st Hindu warriors who stop invaders like Khiliji, Lodi in India.

They also defeated some Indian kings who were not ruling properly.

Kings like Prithiviraj Chauhan and Maharana Pratap rise from their dynasty.

Some important names here are Chalukyas (Solanki) and Paramaras (Pawar’s).

Most Powerful kingdom in North India:-

It’s the Magadha Kingdom which was the most powerful in the North part of the country.

They defeated almost everyone at that time.

Mughals ruled the country for more than 300 years. Until they were destroyed by Marathas in the 18th century.

The first king was Babur who won 1st battle of Panipat in 1526. Here the Mughal Empire started.

After Babar came Humayun then Akbar then Jahangir then Shahjahan and Lateron Aurangjeb.

Mughal Empire started declining in the reign of Muhammad Shah (1719-1748).

It actually got a tough fight from Marathas from Chatrapati Shivaji Maharaj.

Babar was the grandson of Ghengis Khan. Mughal Empire indirectly united India in 1857 revolt and India.

They ruled from North to South up to today’s Karnataka. Also from Gujarat in the west to Bengal of today.

They were enabled to conquered today’s whole Maharashtra and east India.

Chandragupta Maurya is regarded as who invented North India in the 4th century. He also spread Buddhism with king Asoka.

Also, they are some best Hindu temples like Kedarnath, Somnath temple, Ram Mandir, and many more.

The earlier name of North India was Bharat also refer as Hindustan.

Basically, some historians say that there was no term like India or country before Mughals or Britishers invaded India.

There were only sections of people living in this area who use to speak multiple languages.

People were divided into castes and on work culture.

Chandragupta Gupta 1 is regarded as the first king of India. He was so cultural and later on got interested in religious activities.

So then he left his throne to his son Bindusara in the year 301 BC.

He belongs to Magadha Empire.

When experts started studying about Indus Valley civilization or Harappa Civilization. They came to know about the Aryan invasion theory.

Then they researched more on it and came to know that Aryans came from today’s Central Asia.

But whole theory of Aryans invaded India and destroyed the Indus Valley Civilization is a joke.

Today India has about 28 states and 9 UTs. In which North India consists of about 8-10 states today.

The following food is eaten in North India especially

Culture and Religion in North India:-

The culture of North India is so versatile and different as per the boundary of the state. Also, there are 6-7 languages spoken either than Hindi.

When it comes to religion major religion found in Hinduism. Also Jainism, Buddhism, Sikhism are found.

In this article, we learned the History of North India in a simple and unique language. We overviewed Kingdoms, dynasties, rulers, and Mughal Empire.