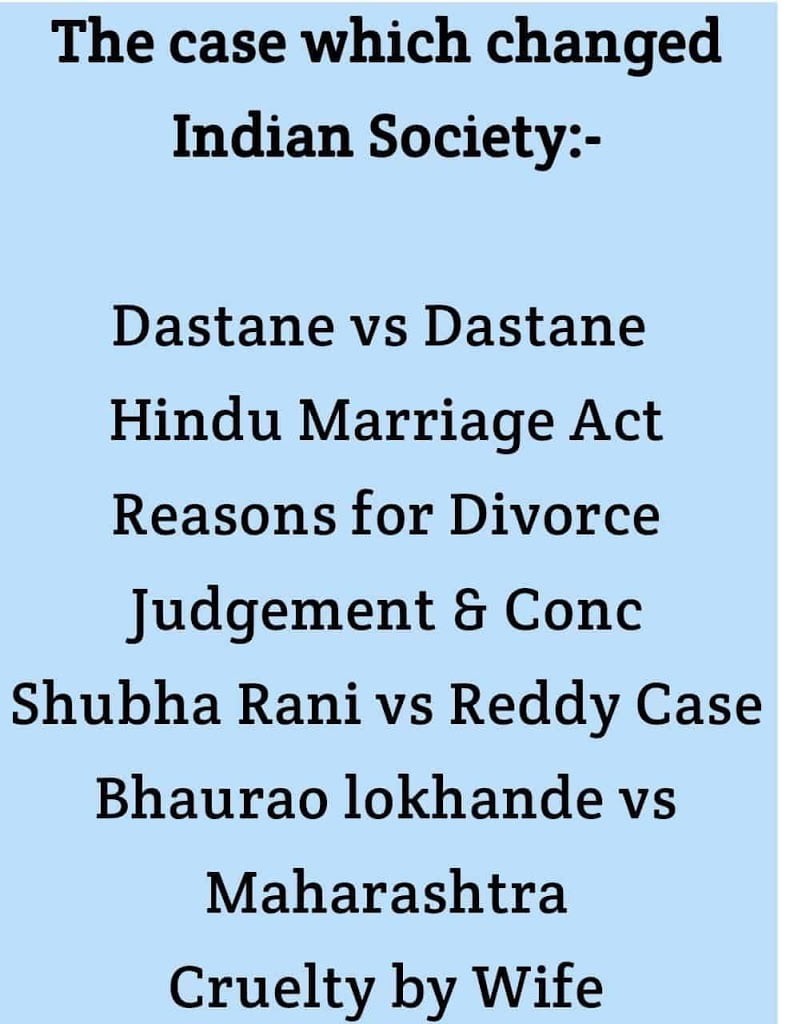 The Supreme Court held, “The Court has to deal, not with an ideal husband and an ideal wife but with a particular man and woman before it.

The ideal couple or a near-ideal one will probably have no occasion to go to a matrimonial court. Even if they may not be able to drown their differences, their ideal attitudes may help them overlook or gloss over mutual faults and failures”.

This article will put light on one such landmark case of DASTANE vs DASTANE which brought into existence a very important concept of CRUELTY.

The case is about Dr. Narayan Ganesh Dastane who filed a case against his wife Sucheta Narayan Dastane adjudicated upon by a bench of 3 Judges Y.V. Chandrachud, P.K. Goswami, and N.L. Untwalia.

Dr. Narayan and his wife Sucheta were highly educated (an important aspect considered in matrimonial cases) got married in 1956 and were blessed with 2 baby girls in 1957 and 1959 respectively.

Before the marriage, Dr. Narayan was informed by his future father-in-law about Sucheta that she had a bad attack of sunstroke while traveling to Japan affecting her mental state, followed by an incidence of cerebral malaria; and was treated by doctors of Yeravada Hospital and now was mentally fit.

Dr. Narayan and his father were satisfied and they went ahead with the marriage. In January of 1956, they went to Pune to attend a marriage in Narayan’s family.

There she was made to consult Dr. Seth of Yeravada hospital by his husband. She asked for few more sittings but she didn’t follow through. She thought that Narayan was trying to set the narrative that she was mentally unsound.

Feb 1961 was the last day when they lived together. At that time she was 3 months pregnant.

This all was followed by a letter written by Narayan who claimed to fear for his life and was seeking police protection. A brief meeting happened but it only worsened the condition.

Later Sucheta wrote to Narayan where she complained about his conduct and asked for maintenance.

She also wrote a letter to the secretary of the Ministry of Food and Agriculture claiming that Narayan deserted her, treated her with extreme acted cruelty, and asked the government for special provisions for her maintenance.

She gave birth to her 3rd daughter in 1961 to which Narayan was not properly invited. After this, Narayan finally moved to the court.

Meaning of cruelty, the burden of proof in matrimonial matters, whether to be proved beyond a reasonable doubt, condonation (when an accuser has previously forgiven or chosen to ignore something which he later complains about legally; may prevent accuser from prevailing), whether sexual intercourse amounts to condonation, whether condonation is conditional, the revival of cruelty.

Section 3: Proof, the meaning of

It rejected the contention of fraud and unsound mind. It passed the decree for judicial separation on grounds of cruelty.

It dismissed the husband’s appeal and accepted the wife’s appeal.

Husband’s appeal was rejected. He was given special leave to appeal, strictly limited to question of judicial separation irrespective of how his consent was obtained or if the respondent was of unsound mind before the petition was filed.

[In the case high court seemed to have guessed the circumstances as opposed to drawing them. Also, it asked the petitioner to prove the case beyond a reasonable doubt though prove by a preponderance of possibilities.

The Supreme court took it upon itself to look into the evidence rather than passing the responsibility to the high court.

Something interesting:  a case is proved when the court believes it exists or it is highly probable that a reasonable man ought to believe it exists. The process has to steps:

Charges of respondents being of unsound mind were fabricated. Cruelty was proved under section 10(1)(b) of the Hindu marriage act but the appellant condoned them by engaging in sexual intercourse.

As the respondent was willing to come back and accepted her mistakes thus, the divorce petition was rejected.

The High Court held that under Section 100 of Code of Civil Procedure, the jurisdiction of the High Court in 2nd appeal is restricted to question of law or to substantial error or defects I procedure which would have produced an error in the decision of case based on merits.

The burden of proof lies with the appellant as it is easier to prove a positive statement by affirmation than a negative statement.

In a matrimonial case, the wrongful party is not considered a defaulter but an offender.

Cruelty against the husband was opened the first time. So dastane vs dastane case was the most important case in India History.

Concept of cruelty and cruelty as grounds of divorce

The cruelty can be both physical and mental.  It can be intentional and unintentional. The physical cruelty is easy to prove and evident. Mental cruelty is one that needs to be proved by stating instances.

This case for the first time put forward the idea of mental cruelty which can be inflicted on a spouse. To date some of the parameters for cruelty have been defined as follows:

The test laid down for cruelty:

The act applies to Hindus, Sikhs, Jains, and Buddhists.

Section 10: It mentions that either party to a marriage solemnized before or after commencement of the act, can present a petition for judicial separation or divorce on valid grounds.

One decree for judicial separation is passed it is no longer obligatory for the petitioner to cohabit with the respondent.

Section 13: This provides for both the grounds for divorce and divorce with mutual consent. This states that the court may pass a decree for judicial separation if it considers it just to do so. The grounds can be as follows

The appellant moved to court for divorce on grounds of cruelty. She was pestered by her in-laws continuously for money. She herself had some money in her name in the bank and a house in jubilee hills.

She didn’t go to her parents for money though she told them about the constant demands. She was afraid to tell her in-laws that she hasn’t approached her parents.

She feared she would be harmed as the demands were a daily routine. Her husband claimed them to be regular and not out of ordinary to ask for a few thousand.

When she moved to court she was sighted to be over-exaggerating and hypersensitive in both the trial court and high court.

It was ruled that as her husband was a budding doctor she could help him with some money. But when she took the case to Supreme Court it was held that dowry is cruelty.

It was also held that cruelty cannot be defined. It is subjective to each case, each couple, each family, and each marriage. It depended on the effects of the acts of one spouse on another and if the apprehensions were reasonable.

Bhaurao Shankar Lokhande vs the State of Maharashtra

Bhaurao was first married to Indubai. Later he married Kamlabai. He was convicted and then he moved to High Court where his appeal was denied and later to Supreme Court where he was acquitted.

He was convicted under section 494 of IPC. The section punishes anyone who marries again while the person is already married. The offense is punishable by imprisonment of 7 years or is liable to a fine.

Also, Section 7 of the Hindu Marriage Act punishes the act of bigamy. Supreme Court contended that to prosecute for bigamy it needs to be proved that the marriage has been duly performed in accordance with religious rites applicable.

Essential ceremonies for Hindu marriages are:

The article thus sheds light on a landmark decision in the family law of cruelty. The various cases have shown that cruelties against an individual cannot ignore just because of social stigma due to gender.

The males suffer the most in such scenarios. False acquisitions can destroy life. Also, a false case by one person not only demeans the sufferings of others but also makes it difficult for them to get justice.

The legal provisions should not be used as a weapon against one’s partner in day-to-day household ups and downs. They should be used in genuine cases.

One’s gender should not be used to gain sympathy neither one should be shamed down due to one’s gender.

Lastly, a marriage is a sacred bond that is like a plant. It needs to be watered, loved, nourished, and taken care of. It cannot be left in scorching, cold winter or heavy rain to survive and then be blamed to have died.

This case is a most important perspective to Indian Polity in UPSC and State services Exams.