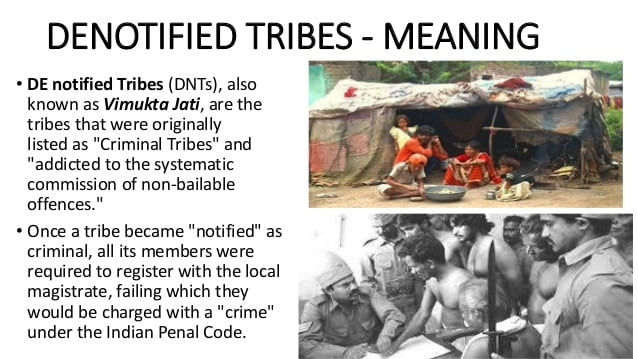 We know that many tribes are found in the world as well as in India also. Tribes found in India are Kharia, Bhils, Murias, Birhors, Baigas, Katkari, Kol, Bharia, Khond, Gonds( found in Madhya Pradesh).

Why do we call them tribes?

What is the meaning of denotified tribes?

2) After the independence of India in 1947, the government repealed the criminal tribe’s act 1871 in 1952 & after that listed tribes in a criminal act known as denotified tribes( Vimukta jati).

There are 198 tribes with nearly 1500 nomadic and semi-nomadic in India according to the Renke commission 2008.

A nomad is a group of people who have no fixed residence, move from one place to another in search of livelihood and hunter-gathering.

A group of people living usually temporary dwelling and practicing seasonal migration, having base camp at which crops are cultivated in other words they also live nomad lifestyle but they have seasonal migration.

What are criminal tribes act?

1) During British rule in India, the British government imposed the criminal tribe’s act 1871(north India) and called them criminal tribes.

2) In order to criminal tribes act they criminalized entire community of tribes by designating them being born and habitual criminal also restriction imposes on their movement and male member of the tribal group were forced to weekly report to the local police.

3) This act applied to the Bengal presidency and another part of India in 1876.

During colonial rule of the British government in India were various reasons to repealed the criminal tribe’s act 1871, one of the reasons behind repealing of criminal tribe act 1871, a kind of non-bailable warrant issued against the 160 tribal groups, were ordered to register themselves in police station & banned the movement of tribal groups without police permission.

When the tribe people go out of the village, they had to show licenses to every police station on the way.

The license was also issued for limited areas. If any people were found without a British government license, there was the provision of imprisonment up to 3 years.

This act was implemented in Bengal in 1876 after that these tribal groups were declared criminal tribes, this act led the fact in these communities,  criminal activities.

In order to eliminate and improve the tribal problems in India, the Renke Commission was formed on 22 November 2003 headed by Mr. Baalkrishna Sidram Renke later in January 2015 formed Idate commission recommend ways of upliftment for tribal people chaired by Bhiku Ramji Idate and submitted its report on May 2018.

The government needs to provide better education and security to the tribals in these states. It is only by the efforts of the government that these people can be brought to their rightful place.

The Renke commission specifies a requirement for raising the living standards of Denotified, Nomadic, and Semi Nomadic Tribes.

3) To set up programs for their education, development, and health.

After independence, the government repealed the criminal tribe act in 1952 by habitual offenders act 1952 but the situation of tribal remains the same as before.

Due to the inclusion of denotified tribes in scheduled castes, scheduled tribes, and other backward classes but they could not get any benefit of reservation and any other facilities of the government of upliftment.

Now the government of India will have to work on the ground level for the upliftment of these tribal communities on suggestions of the Renke and Idate commission.