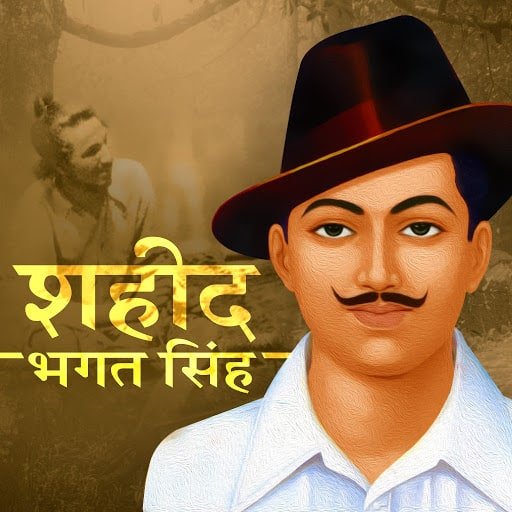 “Merciless criticism and independent thinking are two necessary traits of Revolutionary thinking “:- Bhagat Singh. Today we will go through the life story of Bhagat Singh, who is regarded as India’s biggest freedom fighter.

Hailing from Punjab” Shahid Bhagat Singh” set an example of valor and patriotism. Adoring the profession of “Social Activities at the time of his death at only 23 years of age.

He ignited National Chauvinism in every Indian with his slogan “Inquilab zindabad“.

Britishers back even at the sight of him. Let us take the time machine and flow in The Times Of Bhagat Singh, for his life story which is the epitome of “Spirit of Nationalism” every “Bhartiya” in us.

Born on September 27, 1907, to a Sandhu Jat Sikh family in Punjab (today’s Pakistan)  was the Second Son of Kishan Singh and Vidyawati.

His parents were involved in political activities. They were also involved in the Indian independence era.

The family was inclined in nationalism and at the time of Bhagat Singh’s birth, his father was in jail for political agitation. He went to Dayanand Saraswati Anglo Vedic High School.

So only was the reason he was inspired by Vedic teachings. He Quit school at 13 to devote his life to Indian Independence.

He became involved in several political agitations and was arrested several times. He Left his school after Gandhiji called for boycotting British Institute under a non-cooperation movement.

This makes Bhagat Singh’s biography valuable like a diamond.

At age of 12, he visited the Jallianwala Bagh massacre. This was the movement where he became an Indian Freedom Fighter.

Rejected the idea to marry hellaciously for devoting his whole life towards the nation. In May 1927 he was arrested for allegedly being involved in the bombing but was released. Later on, he began to write Revolutionary newspapers.

In 1928, after the death of Shere Punjab “Lala Lajpat Rai” who was tortured in the lathi-charge in the “Simon Go back” protest.

Bhagat Singh was determined to kill the wrongdoings of James A Scott but instead of him he killed “John.A.Saunders“.

Why was he hanged and his age at that time?

In April 1929, Bhagat Singh Bombed the central Legislative Assembly in Delhi to protest the implementation of the “public safety bill “along with Batukeshwar Dutt. They were arrested and taken to trial.

7 Oct 1930 was the day when his death sentence was given.

Where Gandhiji was responsible for Bhagat Singh’s death?

Even after being clear that bombs were just used to scare and not to kill anyone, Gandhi condemned Bhagat Singh’s action.

He was offered no defense during the trial but this disrupted proceedings with the rants of political dogma. He was found guilty and sentenced to life in prison.

After further investigation, a link between him and officers Saunders’ death got unfold and he was sentenced to death.

He was executed on March 23, 1931( a black day for Mother India). Bhagat Singh’s death was the biggest nightmare for Britishers.

He was smiling while talking to hanging. Also, he was shouting “Down with British Imperialism”.

He wanted Britishers to shoot him and not hanged. But this was not accepted by Britishers.

Also, many other freedom fighters got inspiration from Bhagat Singh. These are some facts about Bhagat Singh.

Some quotes from the inspiring story of Bhagat Singh:✌✌✌✌

“Revolution is an inalienable right of mankind, freedom is an imperishable birthright of all”.

The aim of life is no more to control the mind but to develop it harmoniously not to achieve salvation; hereafter but to make the best use of it here below.

What was Bhagat Singh’s ideology?

He never believed in Gandhian ideology. He was totally against and always favor revolutionary thinking. His main two ideologies were Atheism and Communism.

Movies made on Bhagat Singh:

There are two famous songs made about him. Mera rang de Basanti Chola and Sarfaroshi ki Tamanna.

He was one who gathered the young generation to India’s freedom struggle. That’s Bhagat Singh’s achievements.

In the sum and substance, this Revolutionary leader “Shahid A Azam” is the epitome Of “Love for Bharat Mata” with radical ideas and a rational approach, he is living in the hearts of all Bhartiya echoing” Bharat Mata Ki Jai “inspiring us to be present “Jab Bhi Bharat Ki Mitti Pukare”.

We should never forget him and his partners. Also, we should live independently and follow his ideology. That’s the biggest tribute to Bhagat Singh. The contribution of Bhagat Singh is the same as what other freedom fighters did.

These was about the life story of Bhagat Singh in Short. If you really like the article please share it with your friends.

5 thoughts on “Short Note on [Life Story of Bhagat Singh]”