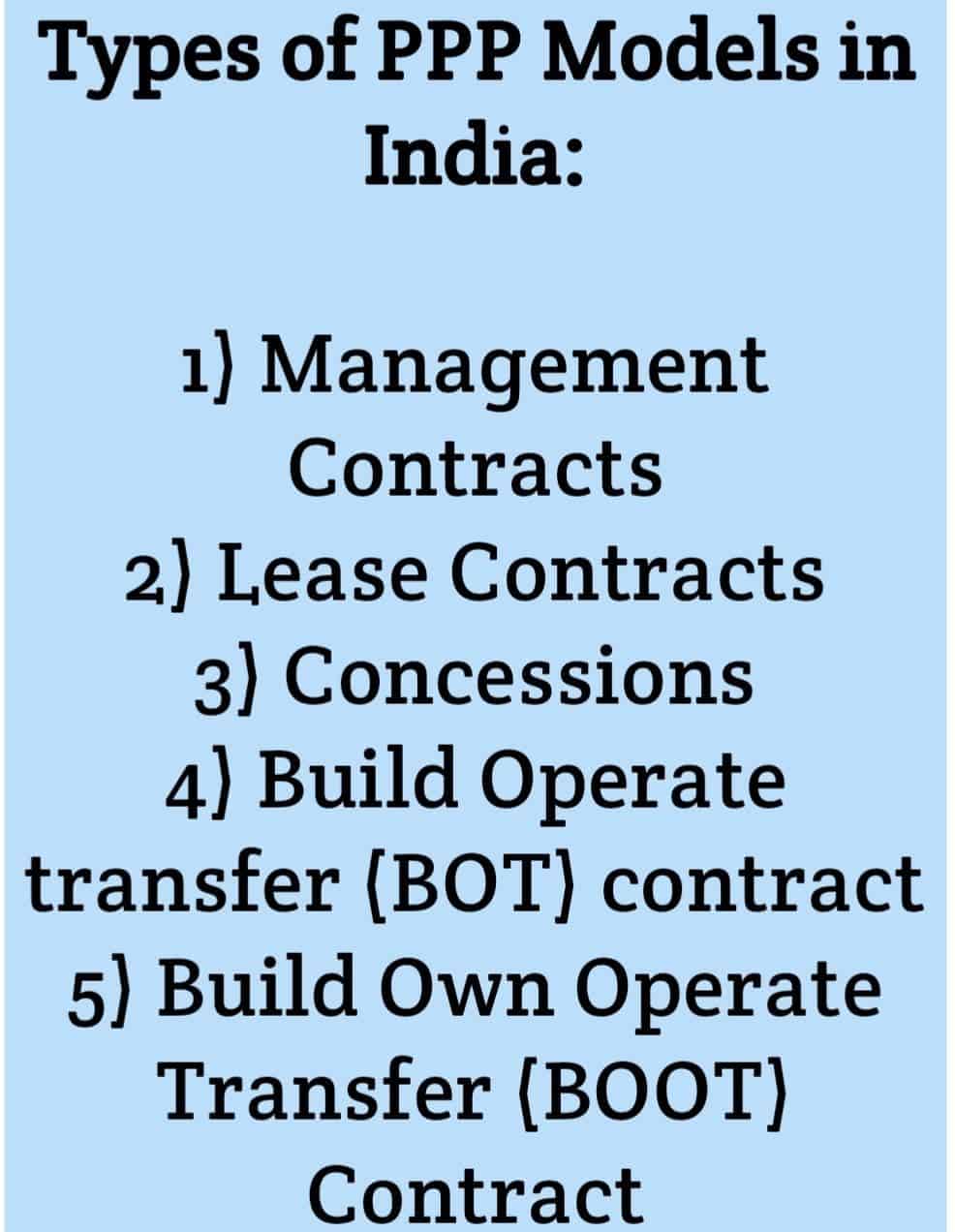 A public-private partnership or PPP is a collaboration or a contract between a Government agency and a Private entity.

A Public-Private Partnership involves financing, constructing, and managing a project in return for a promised stream of payments directly from the governments and indirectly from the users over the projected life of the project and some others for the specified period of time.

WHAT IS PPP MODEL?

The Public Partner is represented by the government at a local, state, or national level. Indian Government does not have the required funds and resources to invest in infrastructure, railways, hospitals, educational institutions, etc.

Also, Government employees are a bit relaxed and a little inefficient because they are safeguarded by labor laws which makes it difficult to fire them. Public partners could take after the labor welfare and make sure that the consumer price is not very high.

The Private Partner can be a privately owned business, public corporation, or consortium of businesses with a specific area of expertise.

The Government has to make a Public-Private Partnership because the resources (like money, technical know-how, and managerial expertise) which the government could not provide for investment can be provided by the private partner. And their employees tend to be more efficient because their salary depends on their productivity.

How to select the right truck accident lawyer

TYPES OF PPP MODELS IN INDIA ARE:-

2. LEASE CONTRACTS – Assets are leased, either by the public entity to the private partner or vice-versa.

3. CONCESSIONS – Responsibility for construction (typically brownfield/expansions) and operations with the private partner while ownership is retained by the public sector.

4. BUILD-OPERATE-TRANSFER (BOT) CONTRACTS – Responsibility for construction (typically greenfield) and operations with the private partner while ownership is retained by the public sector.

5. BUILD-OWN-OPERATE-TRANSFER (BOOT) CONTRACTS – Private partner has the responsibility for construction and operations. Ownership is with the private partner for the duration of the concession.

Please memorize this type of public private partnership in India.

1. YESHAVINI HEALTH SCHEME IN KARNATAKA – It is a health insurance scheme targeted to benefit the poor. It was initiated by Narayana Hrudayalaya, a super specialty heart hospital in Bangalore, and by the department of co-operatives of the government of Karnataka.

The incentive of getting treatment in a private hospital with the government paying half of the premium attracts more members to the scheme. Cardholders could get access to free treatment in 160 hospitals located in all districts of the state for any medical procedure costing up to Rs.2 lakhs.

Premium is deposited in the account of a charitable trust the regulatory body for implementing the scheme. Recognized hospitals have been admitted to the network throughout Karnataka known as Network Hospitals (NWH).

2. AROGYA RAKSHA SCHEME IN ANDHRA PRADESH – The Government of Andhra Pradesh initiated the Arogya Raksha Scheme by collaborating with New Assurance Company and with Public Clinics. It is an Insurance Scheme that is fully funded by the Government.

It provides hospitalization benefits and personal accidents benefit to every citizen below the poverty line who undergo sterilization of the family planning from the Government Health Institutions. The government paid an insurance Premium of Rs.75 per family to the Assurance Company, by completing the expected enrollment of 200,000 acceptors in the first year.

3. CONTRACTING IN SAWAI MAN SINGH HOSPITAL, JAIPUR – The SMS Hospital has established a LifeLine Fluid Drug Store to contract out low-cost high-quality medicine and all surgical items within 24 hours basis inside the Hospital.

The Agency to operate the Drug Store is selected through biding. The successful bidder is a proprietary agency and medical superintendent which is the overall supervisor in charge of monitoring the store and its functioning.

The contractor appoints and manages the remuneration of the staff from the sale receipts. The SMS Hospital has also contracted out installation, operation, and maintenance of CT-Scan and MRI Services to a private agency. The agency is paid a monthly rent by the Hospital and Agency has to render free services to 20% of the patients belonging to the poor socio-economic categories.

4. UTTARANCHAL MOBILE HOSPITAL AND RESEARCH CENTER (UMHRC) – It is a 3-way partnership among the Technology Information, Forecasting, And Assessment Council (TIFAC), Government of Uttaranchal & Birla Institute of Scientific Research (BISR). The Motive behind the partnership was to provide health care and diagnostic facilities to poor and rural people at their doorstep in the difficult hilly terrains. TIFAC and State Government share the fund Sanctioned to BISR on an equal basis.

These were examples of public private partnership in India.

They are an important list for public private partnership in India.

The Government cooperates with a private party to provide some of the public facilities that the government must have to dispense. The Government does not have experts nor does it have enough money to build railways, hospitals, schools, etc. for the public, but the Private Institution has expert workers and money, so the Government partnered with the Private Organization.

This was all about public private partnership in India.