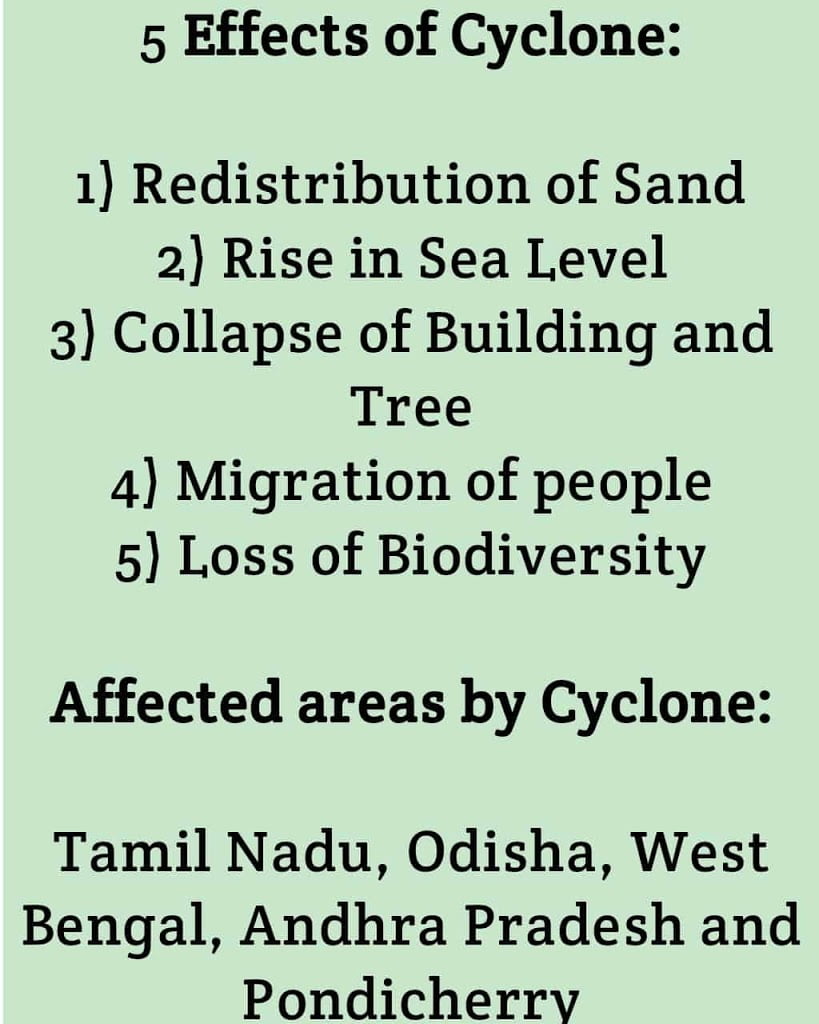 How cyclones are formed

Thus this leads to the formation of Cyclone. Where formation is concerned depending upon the speed of storm cyclone also defers in three types eg:

1) Tropical cyclone which carries speed less than (74 miles per hour).

Effects of any natural calamities are hazardous and dangerous only mostly the destruction occurs in coastal areas where there is a huge loss of forest canopy.

And also as cyclone Carries strong wind which can destroy the small village and also an area with 25 KM around. As cyclone Mostly carries storms, torrential rain, and strong wind so firstly is it affect the coastal areas.

2) Rise in sea level: Cyclone also leads to rising in sea level which leads to tremendous loss of livelihood around coastal areas including other places and also it leads to overflow of seawater which is hazardous for the aquatic plants and animals in water bodies.??

5) Loss of biodiversity: This is one of the important issues which will be seen after the tremendous cyclone the huge loss of biodiversity as the biosphere includes everything so this will affect to all the relevant loss.

Impact of the cyclone on human life

Due to migration there use to be more pressure on the unaffected area and also due to lack of facilities availability it also leads to unhygienic practice.

Cyclone has a huge impact on the environment as the cyclone is associated with the strong wind will lead to the destruction of the ecosystem and also there is a huge loss of animals including the endangered species the animals get killed and also it affects the existing vegetation in the environment.

India is highly vulnerable to natural hazards like cyclones. According to the investigation total 13 coastal area is cyclone prone and even union territory.

Effects of the cyclone on agriculture

Effects of the cyclone on building

As it is already known that cyclone is associated with components like high wind speed and with also heavy rain for long duration which leads to damage of building’s and also the building contents are spoiled due to rain where roofing sheets can get fly off and also it is directly related to the electricity which is under great risk.