The 7th largest country in terms of Area with about 32,87,263 km sq.2nd most Populas country in the world.

Also, the political geography of India is connected with the states reorganization act of 1956. In this act
provinces and princely states in India were divided into states on basis of Language. 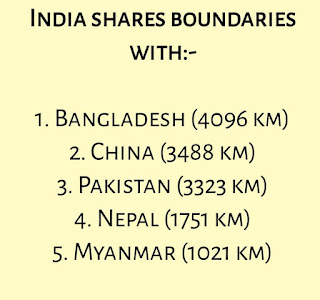 The North-South distance comprises of 3214 km sq and West-East with 2933 km sq. India lies on the Indian plate the North part of the Indo-Australia Plate, whose crust has formed the Indian Subcontinent.

What is political geography?

It is actually a sub-branch or sub-category of geography which usually deals with states, capitals, and boundaries.

It shares borders with about 7 countries

Who wrote the book modern political geography of India?

Who is regarded as the father of Political Geography?

In which hemisphere India is located?

India is located in the northern hemisphere.

The Evolution of Political Geography of India.

The State with Highest Population is Uttar Pradesh and the lowest is Sikkim and in terms of Area, Rajasthan is the highest and Goa marks the bottom row. Gujarat has the highest coastal path with it.

The Lakshadweep and the Andaman and Nicobar Islands are India’s two major island formations and are classified as union territories.

India is having around 14,500 km of inland navigable waterways.

All major rivers of India originate from one of three directions and the peninsula region.

Uttar Pradesh shares a border with almost no states i.e 8, 1 UT & 1 Country. China as a country shares with most no of the Indian States.

Books related to the Political geography of India:-

What is the standard meridian of India?

The standard meridian of India is 82 degrees 30 E from Mirzapur in Uttar Pradesh.
PDF about Political Geography of India
Source:- NCERT

India and Its borders.

Chandigarh with Punjab & Haryana and Hyderabad with Andra Pradesh and Telangana.

At the time of Independence India has 14 states and 6 UT and today 28 states and 8 UT.

This are new states formed in the 21st Century Jharkhand, Uttarakhand, and Chattisgarh in 2000 and Telangana in 2014.

Plzz memorize it or Understand it using the Indian map as it most important in govt exams point of view.

0 thoughts on “How To Learn [POLITICAL GEOGRAPHY OF INDIA]”