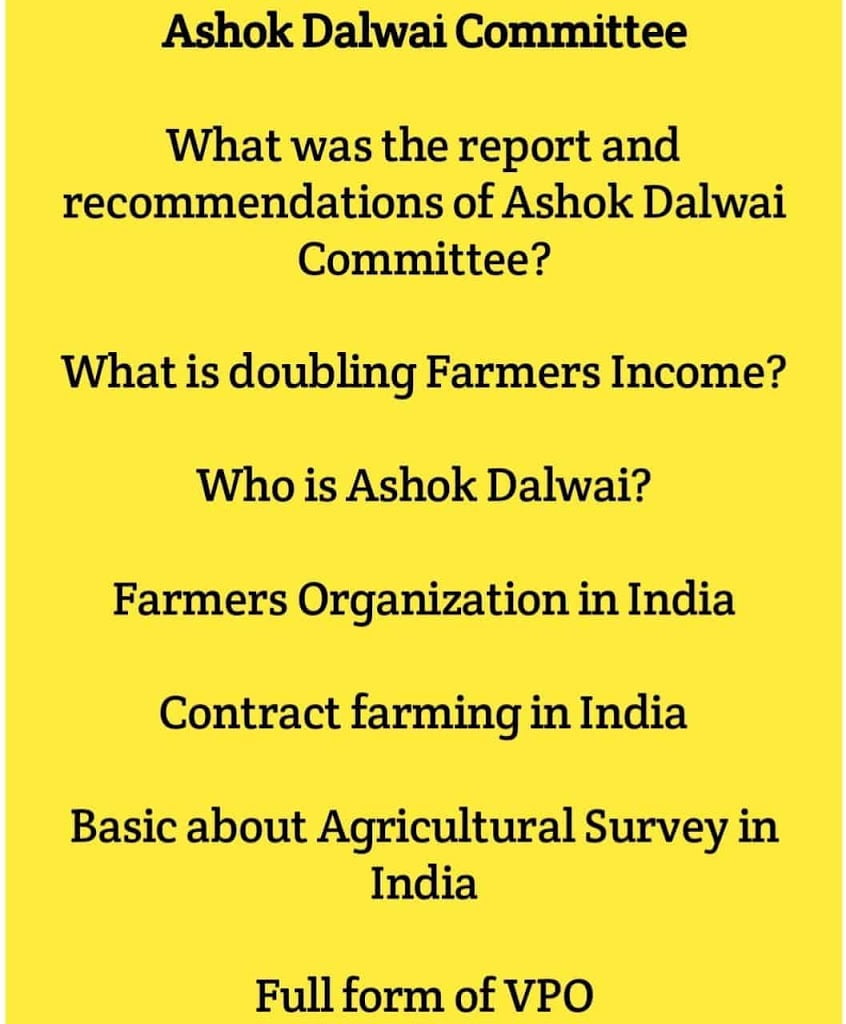 The government had promised to double the farmer’s income in the center budget 2016-17 & achieved by 2022. For achieving the target of doubling the income of farmers by 2022, this committee was formed with 8 members under the head of Shri Ashok Dalwai, CEO of Rainfed Area Authority.

Dalwai committee presented a report to consider the major reforms in the agriculture sector to achieve the doubling of farmer’s income by 2022. ✌✌✌

This committee is responsible for coordination between states, institutions, organizations, and ministers to implementation in the field. The last data of sample survey in 2012-13 has been taken as the base figure for the year of 2015-16.

He is IAS of batch 1984 serve by his services to Karnataka and Odisha, presently serving as CEO of National Rainfed Area Authority. Dr. Ashok Dalwai is a student of Agricultural science & won awards. The first textile policy of Karnataka state,2003 has also given by Dr.dalwai.??

What is Doubling Farmers Income?

When dalwai committee reports & suggestion came out, suggested reforms, measurement & strategies that need to achieve the goal of DFI.

It was the biggest challenge, how would be reformed in the agricultural field completed & how the goal of “farmer’s doubling income “ would be accomplished but DFI committee report has been accepted by the government.??

The government agreed to work on dalwai committee model & work has begun. DFI mainly focuses on increasing the total output from foodgrains ( farmer’s higher productivity ), cost-effectiveness, and last is remunerative prices to farmers.

The report of dalwai committee suggested that to achieve the target in the agriculture sector, there is a need for 10.4% income growth & said that annual growth rate during 2016 to 2022 private investment required is 12.5%.comiittee has suggested center & states take steps for achieving higher shares in farm sectors (income).

The committee focuses on major sources of farmers’ income & recommended measures to fulfill the target they are-?✔

2) Using an economic model to meet the investment needs in irrigation, rural energy, and agriculture & reduce the cost of production.

4) Reforming of farmer’s group and rural producer and better infrastructure.

7) To introduce of agricultural produce & livestock act and establish a separate secretariat for doubling farmer’s income.

In the last 4 years, many reforms have been done likewise Farmers credit was 8.2 lakh crore in 2014-15 & now it grew up to 11.2 crores & PM fasal bima yojana is a risk management tool for farmer’s uncertainty government and the committee is doing very well in favor of farmers income.

in this direction, the government has taken the initiative to double the farmer’s income & formed a dalwai committee to review the major possibilities & sources to increase income in the agriculture sector.

Some organization work on the state level and some is at the central level but the purpose of both the organization is to solve the problems & issues of farmers and to promotes their income.

Many initiatives have been taken by farmers organizations & governments also but these were either for their state’s farmers or for the farmers of their district.

There are some list of surveys held in India-

The report of dalwai committee facilitates private sector shareholding in agricultural activities up to 26% & sets a minimum target of 7000 FPOs/VPOs where members will be farmers.

FPOs help small, landless, and marginal farmers to deal with issues in their agriculture activities. 86% of Famers are small, marginal, and landless who faces challenges during their agricultural activities and marketing.

To strengthen and reduce the issues of farmers, PM Narendra Modi announces to launch of 10,000 FPOs all over India.

According to time, many changes have been made by the govt however farmers have not benefited from those policies and changes as much as they should have. Still, reforms in the agriculture sector are needed to achieve the target of doubling the income of farmers and export promotion of agricultural products.