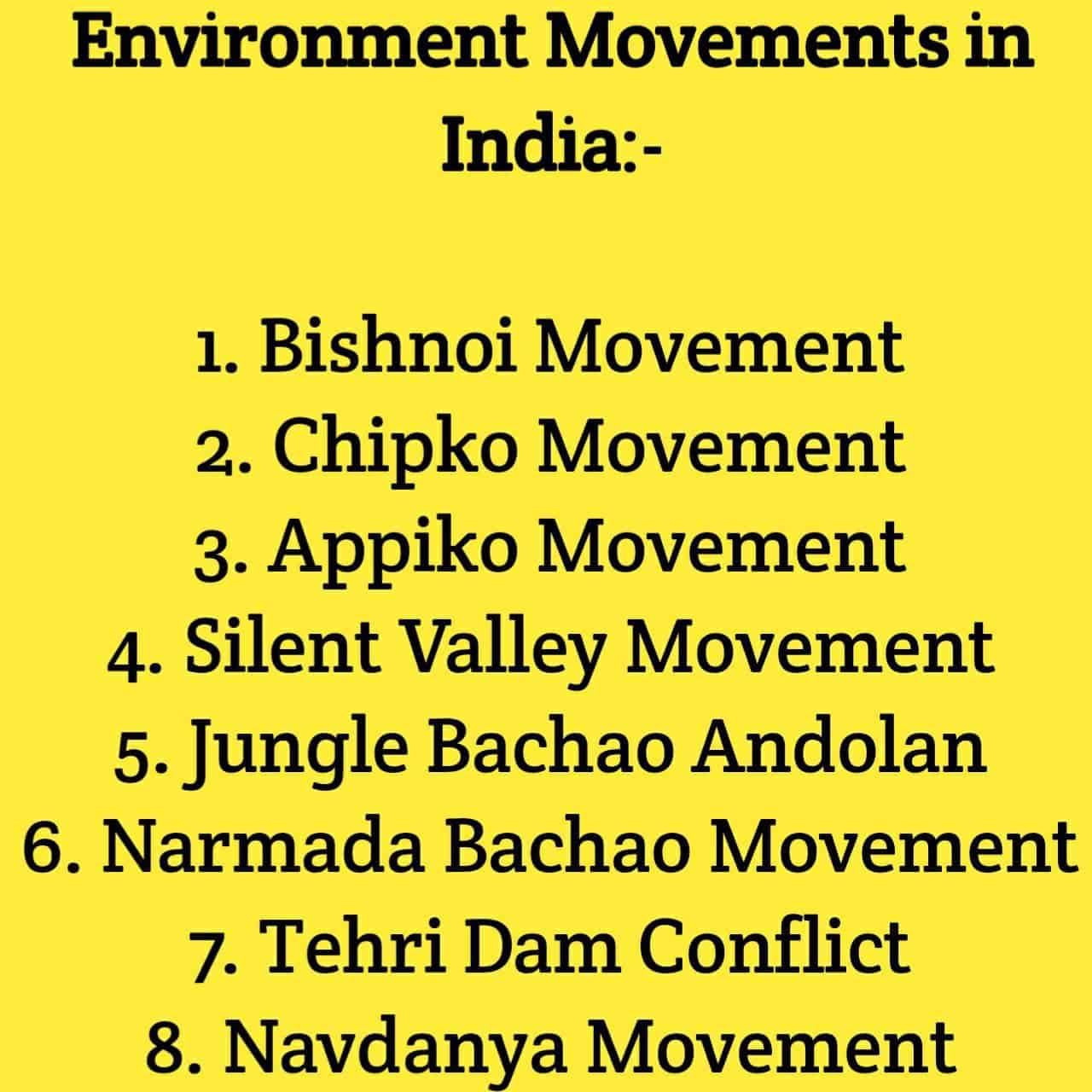 The environmental movements in India is an international movement, the recognition of humanity as a participant in ecosystems. The movement includes ecology, climate, health & human rights. It is represented by a range of organizations, from enterprises, and varies from country to country.

What is Environment & How it is Important?

Environment plays an important role in the healthy living of human beings. The environment is everything that is around us like living or non-living things that include physical and many other natural forces.

It is important to understand the level of vulnerability that our planet faces, as a result of many years of exploitation and human negligence. All living beings depend on the environment for a number of reasons. So, it is the most important subject for our human lives as well as every living organ on this planet.

It is the only natural source of healing as well as a subject for scientific study. Most holistic and ayurvedic therapy depend on nature for healing lives.

Why Environmental Movements In India started?

The green Politics, The Environmental movement started in India as a protest for not providing proper rehabilitation and resettlements for the peoples in late 1700 AD by Sage Sombaji against deforestation. The movement first started to protect the environment through changes in public policy.

List of all The Environmental Movements In India With Short Description:-

1) Bishnoi Movement:- Bishnoi is a religious sector found in the Western & Northern states of India It is a non-violent community of nature worshippers. This movement was started by sage Sombaji around 1700 AD against deforestation. After that Amrita Devi forwarded the movement.

The 363 people from the Bishnoi community were killed in the protest. When the king of this region came to know the protest and killing then he rushed to the village and apologized, and declared the region as a protected area. It is a special movement because this legislation is still existing.

2) Chipko Movement: – (Sticking to A Cause – 1973). This movement took place in 1973 & was launched by Gopeshwar in Chamoli district, Uttarakhand. The amazing part and the notable characteristic of this movement was that the involvement of women seen strongly, this movement was to save illegal cutting of trees in the Himalayan region of (Uttarakhand). Sunderlal Bahuguna and Chandi Prasad Bhatt were the leaders of this movement during the protest.

3) Appiko Movement: – The Appiko Movement launched by Pandurang Hegde in the late 1980s in Karnataka. It’s main targets the tree’s huge afforestation as well as its development, conservation, and proper utilization of forests in the best manner. The meaning of the movement name ‘Appiko’ itself speaks and expresses one’s affection for a tree by embracing it.

4) Silent Valley Movement: – A very famous movement also well known by the name ‘The Sound of Nature’ The area which is tropical and evergreen forests in Kerala, one amongst richest biodiversity in India.

The environmentalists and the people over their people strongly objected to this movement, they objected to the” Hydel power project “being set up in 1973. And after coming under pressure from the local audience, who protested strongly the government had to declare it the national reserve forests in 1985. by this the movement was successful.

5) Jungle Bachao Andolan: – (Rescue Mission – the 1980s) This movement was referred to by many environmentalists as ‘Green Game Political Populism’ The tribal community of Singhbhum district of Jharkhand the part of Chota Nagpur Division of the Bengal agitated against the forest policy which came across by government in 1982. The Government wanted to replace the natural soil forests with the high-priced teak.

6) Narmada Bachao Movement: – (High Tide – 1985) The environmentalists and the local people started protests against the building of dams on the Narmada for the production of hydroelectricity since 1985 it was very popularly and was known as Narmada Bachao Aandolan.

Arundhati Roy supported Medha Patkar who was the leader in this Aandolan. this movement also got the supports from some famous n well-known people like Baba Amte and Aamir Khan.

7) Tehri Dam Conflict: – (Tehri Town 1980s) The game-changing movement, this movement where sunderlal baghuna was on fast till death. This movement was started by the local people around the 1980s and 1990s because the dam project would construct in the seismic sensitive region and people think that it causes submergence of forest areas along with Tehri town.

Despite protest, the construction of the dam is being carried out with police protection, after assurance from the government to review the project, Bahuguna ended his fast but construction goes on with silence peace.

8) Navdanya Movement, (Reaping A Change -1982): -Whether it’s about empowering women or anti-globalization campaigns, environmental activist Vandana Shiva has always had an upper hand in her fights against the authorities. Her ecofeminist movement reinstated a farming system centered on engaging women, changing the current system.

Navdanya was founded by her in 1982, an organization promoting biodiversity conservation and organic farming. The organization not only helped for creating the markets for farmers but also told and promoted quality food.

9) Tarun Bharat Sangh, (sustaining Force-1985) The Ram, yes, he is addressed as Ram. Rajinder Singh, founder of Tarun Bharat Sangh and winner of the 2001 Ramon Magsaysay Award acquiring the position wasn’t a cakewalk.

He brought water to about 850 parched villages in Rajasthan and motivated villagers to harvest rainwater. “He advocated small ponds and check dams but did not oppose big dams or canal networks blindly,” this movement took things to a peaceful environment & saved many lives.

10) Saving the Western Ghats, (Adverting Disaster 1988) The Kailash Malhotra who saved the western ghats march, A 100-Day padayatra across the hills, succeeded in imparting the messages of Environmental degradation and human rights.

Then the areas like Bandipur and Nagarhole were home to sanctuaries, this movement came into life because the Western Ghats a biological treasure trove was struck by an epidemic the deforestation in the 1980s. “4.5 million hectares of forests in Tamil Nadu was lost it has completely vanished these statements was given by the union government and forest Department. so, Kailash Malhotra took such a step for the forest epidemic and it was a huge success.

Women’s role in environmental movements differs from the developed to the developing world, one of the well-known environmentalists was Rachel Carson, whose concern for the environment was voiced in her seminal book, ‘Silent Spring’ in 1962. Carson warned about the dangers of using the chemical as it has serious effects on human health.

Women in India are seen widely taking action and protesting against deforestation and conserving water. Globally, there are many examples of women writing & fighting to save the environment.

One of the earliest recorded women protecting the environment was traced back to 1731 among the Bishnois, who lived in the scrub forests of Rajasthan, near Jodhpur. Amrita Bai of Khejaralli village sacrificed her life.

Impact of Environmental Movements In India

Increasing the confrontation with nature in the form of industrial growth, degradation of natural resources, and occurrence of natural calamities, has resulted in imbalances in the bio-spheric system.

Report such as the World Commission on Environment and Development in 1987 and State of India’s Environment A Citizens Report (1982) have led to the monitoring of the contradiction of growth and the erosion of the environment.

The Defence of the Planet and Save the Earth Movement, formation of the Earth’s Friends Society reflect the growing concern for the future of mankind. In India also the ecological and environmental issues have received quite considerable attention from different scholars.

The local movements centering deforestation, waterlogging, salinization, and desertification in the command areas of major rivers of Kosi, Gandak, Tungabhadra, and in canal irrigated areas of western India, like Punjab and Haryana, have established the efficient use of water as a source of the natural commodity.

All these movements have reflected the ill-conceived natural resource consumption by the so-called development projects, which have resulted in devastations in the natural resource base of the nation. In the following section, we describe a couple of major environmental movements that have occurred in different parts of India.

The data presented by Guha in 1989 and Shiva in 1993 on the cons and consequences of the erosion of natural resources reflect the composite ideology of environmental issues in India.

1. Save Dehing-
The April 2020 decision took a different vision by which the protest began by the National Board Of Wildlife (NBWL) to allow North-Eastern Coal Fields (NEC) to do opencast mining in 98.59 hectares of Dehing-Patkai Wildlife Sanctuary.

2. Save Aarey
When the rest of the world was moving towards climate action, the Bombay High Court dismissed the petitions against the felling of the Aarey Colony for the Mumbai Metro Rail Corporation Limited’s (MMRLC). The ‘Save Aarey’ protest rallies were going since the proposal of the car shed and gained momentum after the approval in August.

3. Climate Action Strike
The third week of September 2019 saw the students across the metro cities like Delhi, Mumbai, Bengaluru, Kolkata, and Chennai who were peaceful protesting at city centers, heeding Greta Thunberg’s call for mass protests to urge governments to take proper action on the issue of Climate Change. This was a largely youth-led movement that made it a point to stress the urgency of global warming through creative slogans. The point was to spread awareness that global warming has impacted a mere 2-degrees shift on the planet.

4. Right to Breathe Protest
The nation’s capital raised into an environmental crisis as the Air Quality Index (AQI) jumped to 494. the unhealthy smog choked the city with difficulty in breathing in Delhi being considered a hazard to one’s health. The protest organized as a result of various movements on social media, saw over 1,500 people gather at Amar Jawan Jyoti India Gate on November 5.

Leonardo Dicaprio highlighted the success of this movement of climate action. A specialized panel was set up to look after the issue, Supreme Court ordered the state governments to address the crop and waste burning issue, Centre got agreed to use the Green fund to combat toxic air pollution but the air quality was still vengeful.

1. Which were the first environmental movements in India?
Ans – Chipko Movement.

2. Which were the most successful Environmental Movements in India?
Ans – Silent Valley Movement.

Hence, we can say, numerous grass-root environmental movements in India were started against the developmental activities that have endangered the ecological balance that changes the public policy more inclined towards the environment.