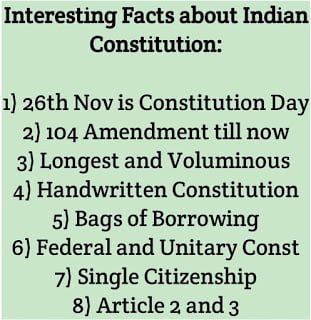 So, in 1946 constituent assembly was adopted. Its main function was to create the Constitution of India. So today we will discuss some interesting facts about Indian Constitution.

The Constitution Assembly of India accepted the constitution on 26th Nov 1949. It came into force on 26th Jan 1950. Today we celebrate 26th Jan as Republic day due to it.

Before discussing Interesting facts about Indian Constitution, let’s understand what is the constitution?

The Constitution is basically the supreme book of any country. It guides the country on how the government will take. It gives some supreme and basic rights to citizens of the country.

Long Back from Mughals to Europeans, we were ruled for about 1000 years. Being the most diversified country with 8 major religions and 1400 languages, the Indian constitution is oxygen for us.

Also, the statue of Babasaheb was also inaugurated in Mumbai. The Statue of equality memorial was inaugurated on Oct 11, 2015.

2.  Babasaheb was ready to burn his Constitution. ???

The Constitution maker himself was ready to burn it, but why? The reason was to give more rights to the Governor of the state. On 2 Sep 1953, there was a strong argument in parliament regarding this topic.

Prime constitution-makers like Babasaheb were against it. They said only the Chief Minister or Prime Minister should have a stronghold on the state and country. In today’s constitution of India, we may see a 90:10 ratio in terms of power.

His famous quote “Major harm to the country is if you injure the minorities”. So he thought that the Governor is not a person who is elected by the people.

So he should not have important powers of the state. Isn’t it an interesting fact about Indian Constitution?

3.  First meeting of the Constituent Assembly.

India’s future was started drawing on 9th Dec 1946. On this date, there was the first meeting of the Constituent Assembly. It had so many members which later went to trash due to partition.

Dr. Sachchidananda Sinha was the acting temporary president at that time. After this meeting, just after 8 months, India got its freedom. But harmful was that it got separated into two pieces.

India started working with the constitution on 26th Jan 1950. Our Indian constitution is neither rigid nor more flexible like other countries. But surely it can be amended under the parliament of India with article 368.

It is not as easy as Britain or hard like the USA to make changes. Till today there were 104 amendments done. Most famous is the 42nd amendment of 1976.

It was done in an emergency and the preamble of the constitution was amended by adding 3 words. Those three words were secular, socialist, and integrity.

5. Longest and Voluminous Constitution of the world.

Indian constitution is the longest, lengthiest and biggest voluminous constitution in the world. Today it has about 25 parts, 12 schedules, and 448 articles.

The thing to be noticed here is it is the only sovereign and republic country which has this diversified in it.

It was signed on 24th Jan 1950 along with other 284 members. There were 15 women in it. Durgabai Deshmukh was the famous and wife of C.D.Deshmukh.

Indian Constitution was neither typed nor printed. It was completely manually written by Prem Behari Narain Raizada. It was written in calligraphy and some basic italic style.

He was given some special status for it. He was also allotted a special room in the Constituent assembly. It took around six months to complete writing.

He used N0.303 nibs and 254 pen holders for writing. He didn’t even charge a single penny for it. He just asks for permission to write his and his grandfather’s name on every page.

It was published in Dehradun and was photolithography by the Survey of India. This is a most interesting fact about the Indian Constitution.

Do you know where the original copies of the Constitution are? They are kept in special helium-filled cases in the library of parliament. It is located in Delhi.

For the most part, was taken from the Govt act of 1935. Here is a list of what we took from which country.

7) Australian:- Concurrent list, Freedom of service and trade in the country.

11) Japan: Law of the supreme court

Every page was decorated by Shantiniketan artists. They had a team that manually did this work. Nandalal Bose himself painted many images.

Most of the preamble was painted by his student Beohar Rammanohar Sinha. The work was done in Kala Bhavan and Nandalal was also known as acharya.

Over 2400 amendments were done. There were three readings that took place. The 2nd reading was the longest and had major amendments.

The final draft was ready on 26th Nov 1949. There were a total of 11 sessions in the Constituent assembly. The last 11th session was between 14-26th Nov.

It took over 2 years, 11 months, and 18 days to make the constitution. It cost around 64 lakhs to build the constitution. The draft committee was made on 29th Aug 1946 and total work was completed on 24th Jan 1950.

The 1st signature was done by Prime Minister Nehru. And then later on 283 members did it. As I mentioned, every member signed two times.

The signature process took on 24th Jan 1950. Also, we adopted the National anthem and song on that day.

Till now the biggest amendment was done in 1976. This was the time when the country was suffering from the dictatorship of Indira Gandhi. The Preamble of the Indian constitution was amended by adding three words.

This era is also called as Mini Constitution of India.

The 44th amendment is too famous because there was a non-congress govt 1st time. It just abolished the fundamental right of property. It removes the right to hold, acquire and dispose of the property. These is the most interesting facts about Indian Constitution.

Both Indian and American constitutions started with WE THE PEOPLE. According to experts, it is the best gesture to every citizen of India. Also, this reminds us of Swami Vivekananda’s famous statement “Brothers and Sisters of America”.

Indian Constitution has a preamble in it. Often many countries don’t have it. It is also called the Identity card of the Constitution. N.A.Palkhivala gave this term to it.

17. People are the real power.

The best thing about the Indian constitution is that here people are kings. They got fundamental rights, duties and also can challenge the PM, CM. A simple person here can be the Prime Minister of India.

There is a proper parliamentary system with the Head of the council and its ministers. That makes the Constitution of India powerful.

Indian constitution strictly affords only Citizenship with it. If you adopt any other country citizenship then you will automatically get withdrawn from Indian citizenship.

19. Head and President of the Assembly.

Dr.Sachchidananda Sinha was the temporary president of the Const assembly. The permanent president was elected by Dr.Rajendra Prasad.

The Head of the Drafting Committee was B.R.Ambedkar. There were two vice presidents H.C.Mukherjee and V.T.Krishnamachari.

Some important facts about Indian constitution:

2) Introduction to Constitution of India

5) Working on a democratic constitution

India’s constitution is regarded as the best constituent in the world. Being the lengthiest it just has 104 amendments. But some experts didn’t like articles 2 and 3.

It says that the center can change the name and boundary of the state with just a simple majority. No doubt India is a Union of states, but the center might do dictatorship on states for their own political gain. This is where we get interesting facts about Indian Constitution.

Important facts about the Indian Constitution for competitive exams:

Some strangest laws in India:

In this article, we went through interesting facts about Indian Constitution. We saw how the Indian constitution interferes with our daily lives.

Also here power lies with people only. Even the Prime Minister and President can’t do dictatorship on people.

Some key points are single citizenship. Fundamental rights and DPSP are the too spinal cord for Indians. The proudest thing here is that the world considers it as the best constitution in the World.

Hope we help you to understand Interesting facts about Indian constitution in simple language.