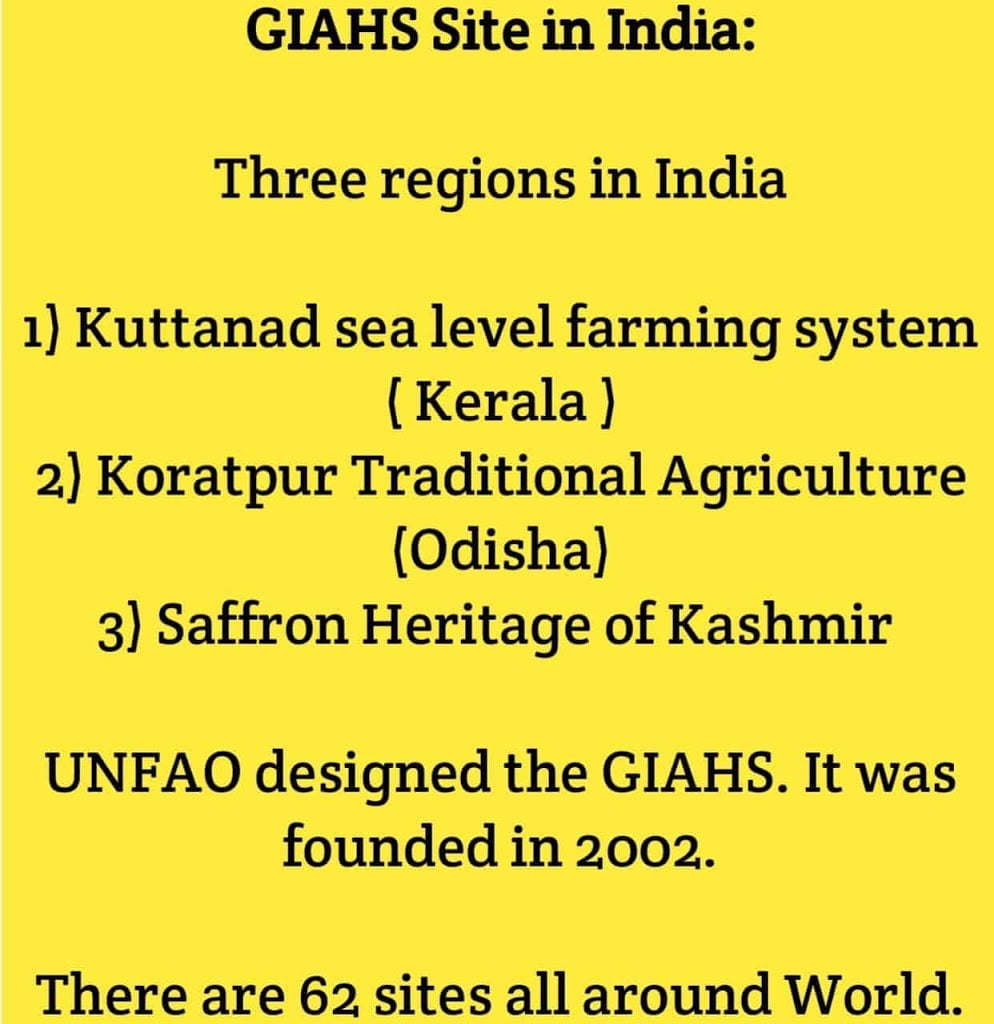 In 2020, 41.49% of the Indian workforce is engaged in agriculture. Agriculture in India is just not a livelihood but a connection with our motherland.

This article talks about the recognized agricultural sites which hold global importance in today’s time when the world is going through an environmental crisis and an alarming rate of deterioration of natural resources.

So today we will discuss GIAHS in India. ✌✌✌

At this time these agricultural systems all over the world bring hope in these dark times, a hope for a future with food for all which is affordable and accessible.

There are three regions in India:

It is a program by UN FAO founded as a UN partnership program.

It is a living, evolving system of human communities in an intricate relationship with their territory, cultural or agricultural landscape, or biophysical and wider social environment.

5) The aim behind designations?

It aims to further the goal of sustainable development. It helps to identify and designated remarkable agriculture systems in the world.

6) What are the major goals?

It works towards launching a process of dynamic conservation for the maintenance of unique and culturally rich agro-environments, a source of ecologically relevant traditional agricultural systems, and technologies that have proven to be resilient and sustainable through the centuries.

7) How many sites all around the world?

8) What are the need and importance?

It is the leading way for a system to identify, support, and safeguard agricultural systems. Systems that are sustained and conserve our biodiversity and genetic resources for food and agriculture, rural livelihoods, knowledge systems, cultures, and remarkable landscapes.

Koraput is situated in the Western Ghat region of Odisha. The region was once poverty-stricken with about 79% tribal population when Chennai-based MS Swaminathan Research Foundation (MSSRF) came to their rescue.

MSSRF proposed a system that was pro-poor, pro-nature, development, and women-centric. The region is endowed with great genetic variety even medicinal plants.

The tribal people are encouraged to use their traditional knowledge and practices to advance their agriculture output.

They shifted from chemical to natural pesticides and fertilizers by using neem and cow dung. They even used their knowledge to test the viability of seed even before sowing.

The knowledge has been shifted from one generation to another making it hereditary and giving it cultural values. ???

Region of Jeypore: This region has a high variety of rice and has been working to conserve its biological heritage. The tribes in the region also have sacred groves which are biological heritage and have led to patches of forest being protected. These groves are worshipped as deities. ??

MSSRF is even trying to help the farmers gain patents for their work. The foundation is also working towards establishing a heritage park.

It is observed on 21st May, according to United Nations. The resolution was adopted on December 21, 2019. The history of the day though dates back to 2005 when it was first celebrated in Delhi. ???

The Indian government in 2015 proposed expanding the observance of the day through the FOA Intergovernmental Group of Tea.

The day is to raise awareness about the long history and deep culture and economic significance of tea around the world. It aims to promote and foster the idea of sustainability in tea production.

It also voices the concerns of tea trade workers and growers. It calls out for fair trade and price supports to prosper the tea industry. The tea industry in 2020 had a volume of 6.71 million tons ad is expected to grow to 7.89 million tons by 2026.

The article gave readers a look into the GIAHS in India. These agricultural systems are what will lead way for sustainable agriculture and food security.

They could prospectively help to converge the traditional practices with sustainable discoveries of modern time.

What we can create are the techniques that will help humanity when humans will fail to help themselves. What we can comprehend are methods that will feed our future generations when things may seem out of hand.

What we can find our methods to salvage what is left and what can be still protected and nurtured.

Initiatives like GIAHS are what are highlighting the best from our past and the sustainable from our present and paving the way to our future for our future generation.

They highlight how important in situ conservation is and how our needs can be sustainable even while protecting the healing mother Earth. After all, we have a long future ahead of us and an even longer one to prepare for.

This is an important topic related to UPSC and State services exams. many times questions have been asked about it in BPSC, UPPSC, and MPPSC exams. It sheds knowledge about Indian geography and agriculture.