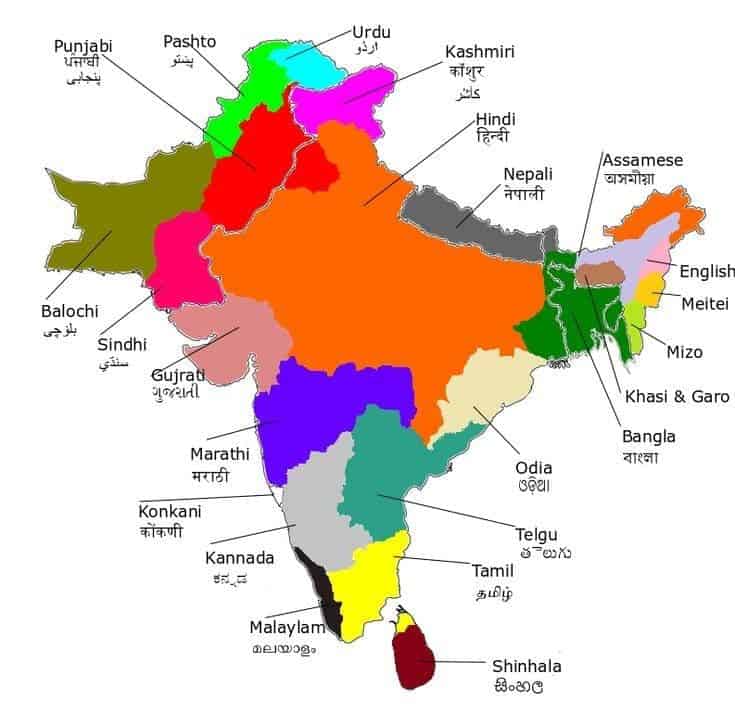 India is the 2nd most populous country and 7th largest country in World. It has the largest diversity in World. India has more than 8 major religions with it.

Also, there are more than 30 major languages spoken. So the question here is which language is used in India? As the seen population of about 1.4 billion will surely have this many languages.

All those major 8 religions include Hinduism, Jainism, Buddhism, Sikhism, Islam, Christianity, Judaism, and Zoroastrianism.  Each religion has its own separate languages with it.

Hinduism historically had Sanskrit, Marathi, Odia, and Tamil. Islam has Urdu and Hindi. Sikhism has Punjabi. So you might have got why India has this many major and minor languages spoken.

Indian languages are divided into two categories. 1st is Indo-Aryan languages which comprise 78 % of the Indian population.

India is ranked 4th in most languages. There are about 450 languages here. The first three countries are Papua New Guinea, Indonesia, and Nigeria.

When it comes to the major language of India, then surely Hindi makes the place here. The reason for this is that about 44 % of Indians speak that language while 55 % understand it.

Also as per const article 343 Hindi and English, both are official languages of India. But the point here to mark is that Hindi is not the National Language of India.

India doesn’t have any National language in it. It has 22 schedules in the Indian Constitution.

Most Spoken Language in India:-

As we go to all census of India from Independence from 1951 to 2011, we find that the most spoken language in India is Hindi. Hindi is spoken majorly in North India, Northeastern India.

Also, it is the 2nd language spoken in States like Gujarat and Maharashtra. 2nd & 3rd most spoken language in India is Bengali and Marathi.

Top 10 most spoken languages in India:-

All those 8 languages were spoken by about 5-10 million people in India. They are also 2nd most languages spoken in their respective states. Konkani is excluded as it is the official language of Goa.

Constitutionally as per article 344(1)  and 351 of the Indian constitution, the 8th schedules includes 22 following languages:-

Some other languages like Marathi, Bengali, Maithili speakers are also approaching govt of India to add those languages as classical languages.

Malayalam is the toughest language to learn, write and speak as per experts. It is not that hard as Mandarian Chinese but in India, it is hardest.

The most important language of ancient India in Sanskrit. Other languages include Prakrits, Marathi, Old Tamil, and Odia.

Languages as per major metro cities in India:-

Although these are all important metro cities in India that are developed so Hindi and English is also well-spoken in these Cities.

Sanskrit is the 1st language in India and was also accepted by the whole of India at that time.

The old language of India:-

Tamil is the oldest language in India and also World. It is older than Sanskrit. Also, some Tamilians claim that Lord Shiva taught them this language. It is more than 5000 years ago.

Also, there are more other categories of languages found in India:-

But these 4 categories only have 1 % of speakers in India.

Use of English in India:-

Some of them are first language and some 2nd language speakers. India is the 2nd largest English-speaking Country.

Which is the sweetest language in India:-

Bengali is regarded as the sweetest language in India. Also, it is the 2nd most spoken language. It is also the official language of Bangladesh.

Which countries English is spoken in India?

In this article, we learned about the important languages used in India. You got to know that every state represents 1 major language. Also, there are a total of 22 scheduled languages in India.

Only two languages Hindi and English are official languages in India. Also, a point to be noted is Hindi is not the National language of India. India doesn’t have any National Language to represent.